Was a painter from 1912-1956, painting the abstract expressionist in order to use physical art to help with major depression, being an alcoholic and heavy smoker.

A quote from Pollock himself I think describes what being an artist really means.

My painting does not come from the easel. I prefer to tack the unstretched canvas to the hard wall or the floor. I need the resistance of a hard surface. On the floor I am more at ease. I feel nearer, more part of the painting, since this way I can walk around it, work from the four sides and literally be in the painting.

I continue to get further away from the usual painter’s tools such as easel, palette, brushes, etc. I prefer sticks, trowels, knives and dripping fluid paint or a heavy impasto with sand, broken glass or other foreign matter added.

When I am in my painting, I’m not aware of what I’m doing. It is only after a sort of ‘get acquainted’ period that I see what I have been about. I have no fear of making changes, destroying the image, etc., because the painting has a life of its own. I try to let it come through. It is only when I lose contact with the painting that the result is a mess. Otherwise there is pure harmony, an easy give and take, and the painting comes out well.

Sporadic color choices, and physical whips to the canvas, almost like boxing with paint is what makes his pieces so intense and inspirational.

This is my favorite reminding me of city life.

His wife, Lee Krasner actually taught Jackson most of his artwork. Once they were married in 1942, with her extensive art career and degree. She was a very supportive and patient woman trying to teach and support this man.

He did lifesized paintings, and started the drip paint method. This also influenced 50’s fashion from his bold and dark color choices. Below, is a picture from Vogue. 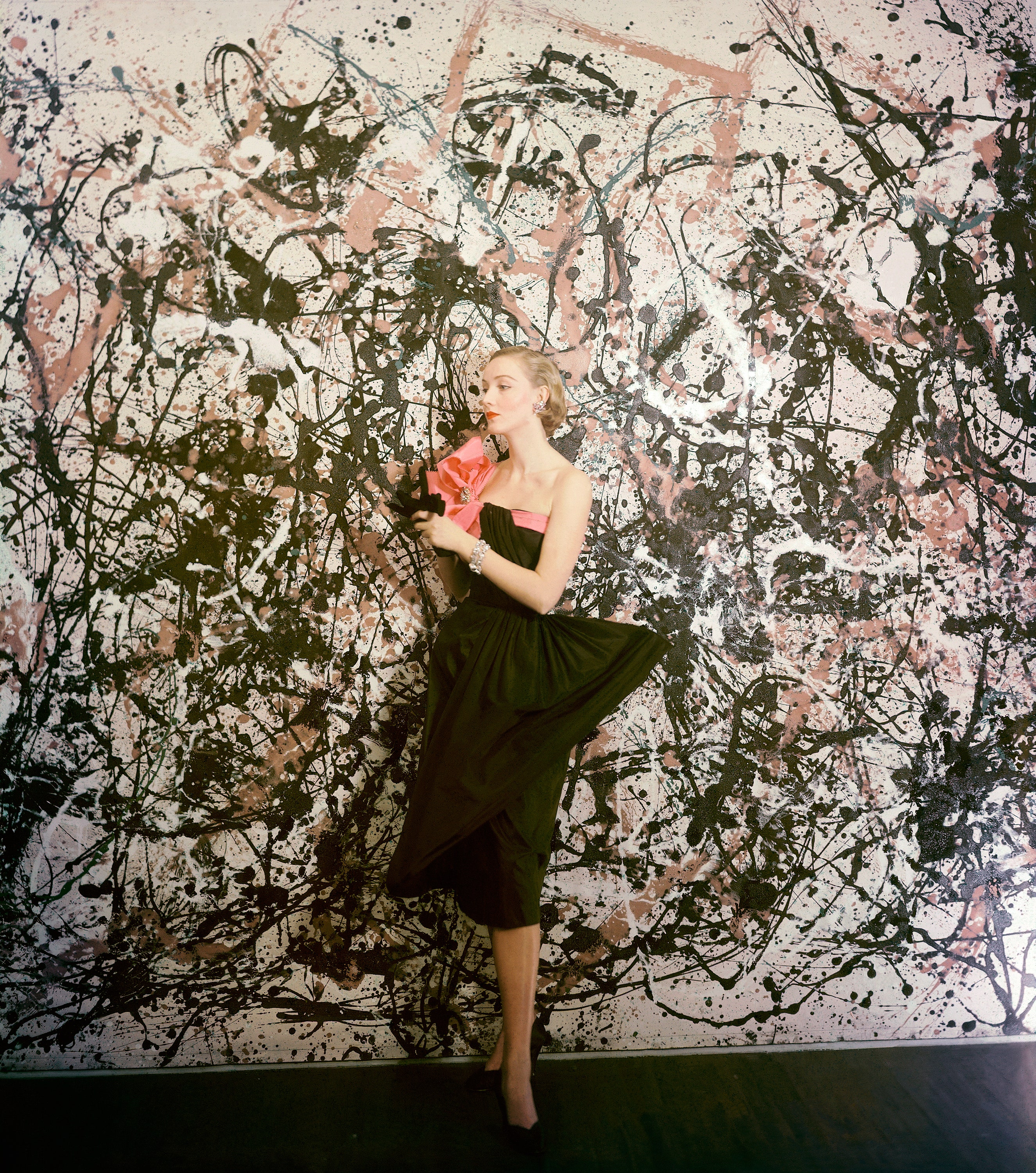 He converted their barn into a studio, and started the drip paint. He was even called, “Jack the Dripper”.

Later on in his life, as many artists do, somehow we all resort back to nature. His influences were heavily from walks in the park, and farmlife in the country.

Below is a painting that represents his deep affliction with alcoholism.

“In 1955, Pollock painted Scent and Search, his last two paintings.[36] He did not paint at all in 1956, but was making sculptures at Tony Smith‘s home: constructions of wire, gauze, and plaster.[23] Shaped by sand-casting, they have heavily textured surfaces similar to what Pollock often created in his paintings.[37]

Pollock and Krasner’s relationship began to crumble by 1956, owing to Pollock’s continuing alcoholism and infidelity involving Ruth Kligman.[38] On August 11, 1956, at 10:15 pm, Pollock died in a single-car crash in his Oldsmobile convertible while driving under the influence of alcohol. At the time Krasner was visiting friends in Europe and she abruptly returned on hearing the news from a friend.[38] One of the passengers, Edith Metzger, was also killed in the accident, which occurred less than a mile from Pollock’s home. Kligman, another passenger, survived.[39]

For the rest of her life, Krasner managed his estate and ensured that Pollock’s reputation remained strong despite changing art world trends. The couple are buried in Green River Cemetery in Springs with a large boulder marking his grave and a smaller one marking hers” From Wikipedia.

When I am in my painting, I’m not aware of what I’m doing-Jackson Pollock

And THAT is why we paint…for the process…for the muse of art that calls to us. As an obsession, as a desire, but never of our own doing. The paint tells us what to do, we have relationships with it like an abusive lover, and make up with it later. It is what let’s us understand humanity. But, the minute we let our trauma’s control us is when the paint dosen’t want us anymore. We must keep it up in order to survive. Let Pollock be a story to us all. Keep relationship with the paint, and let it heal the relationship with ourselves.

One thought on “Jackson Pollock”

Me Too…Go to Buy Art Page to have THIS in YOUR home TODAY!

For even more ART add me on Facebook, Camile McGregor.